Fabric/Project Diet Roundup - The end of an era

It's been a bit of an epic 6 months.  Projects have been started... for various reasons... and projects have been finished... although certainly not all of them.  A few new lengths of fabric have made their way into my life... but all in all, I think the Fabric/Project Diet has been a success.  BUT, I am glad to see the end of it! 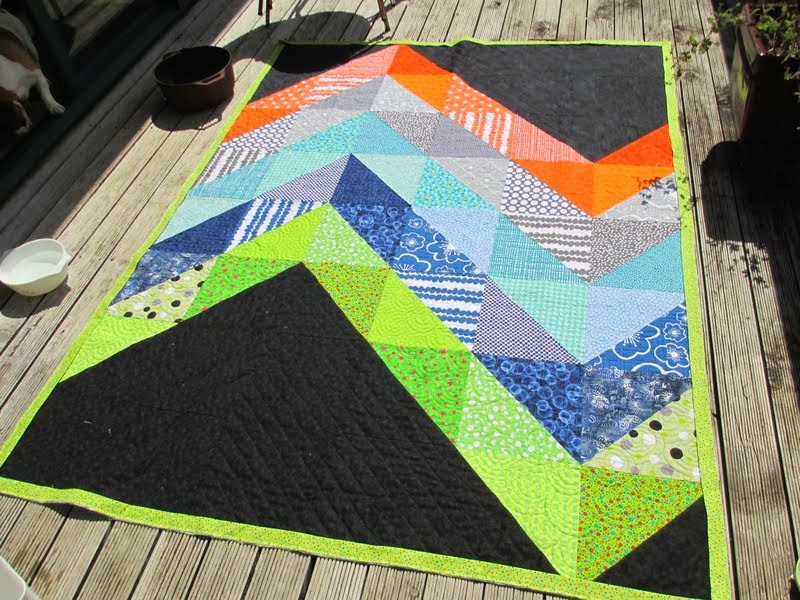 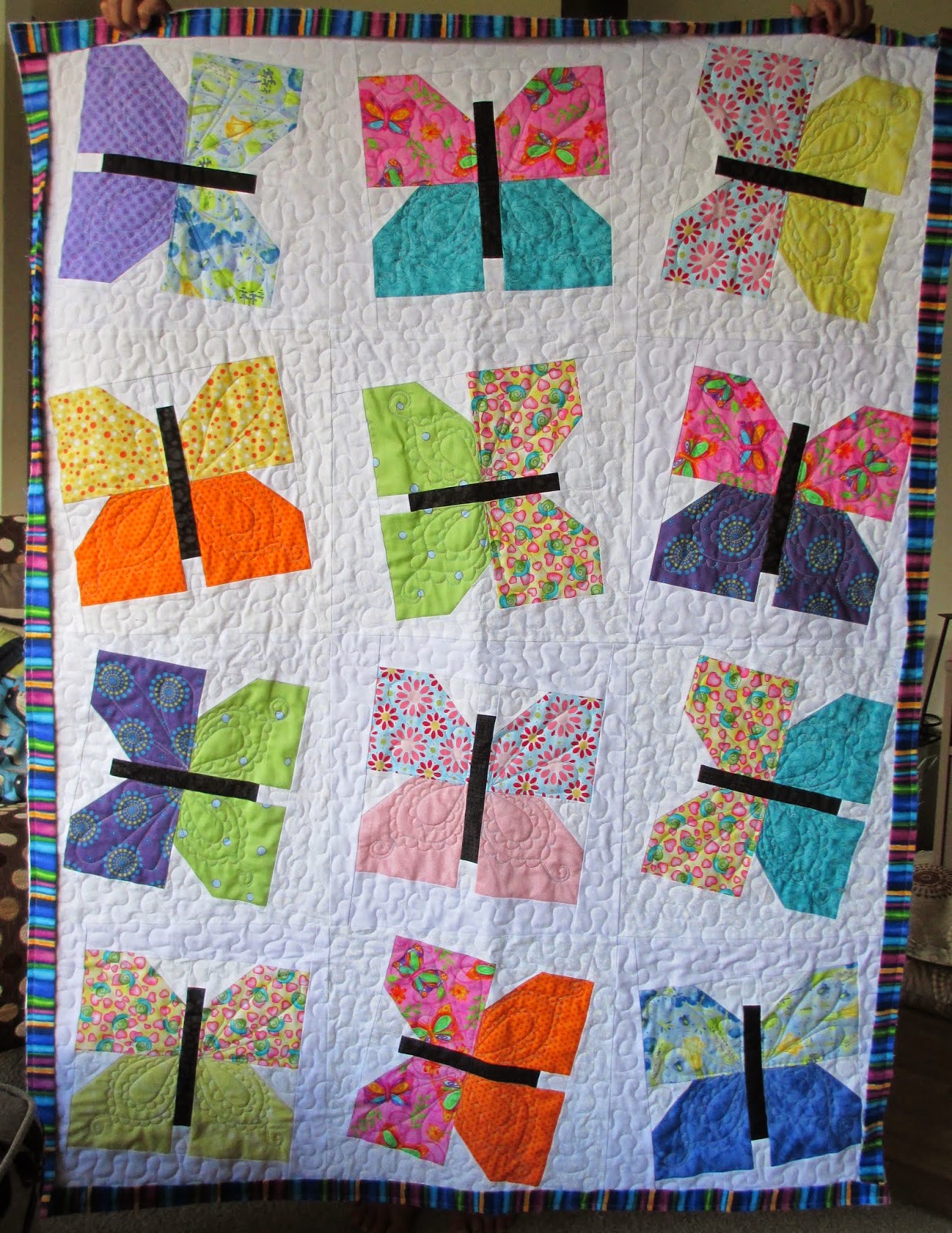 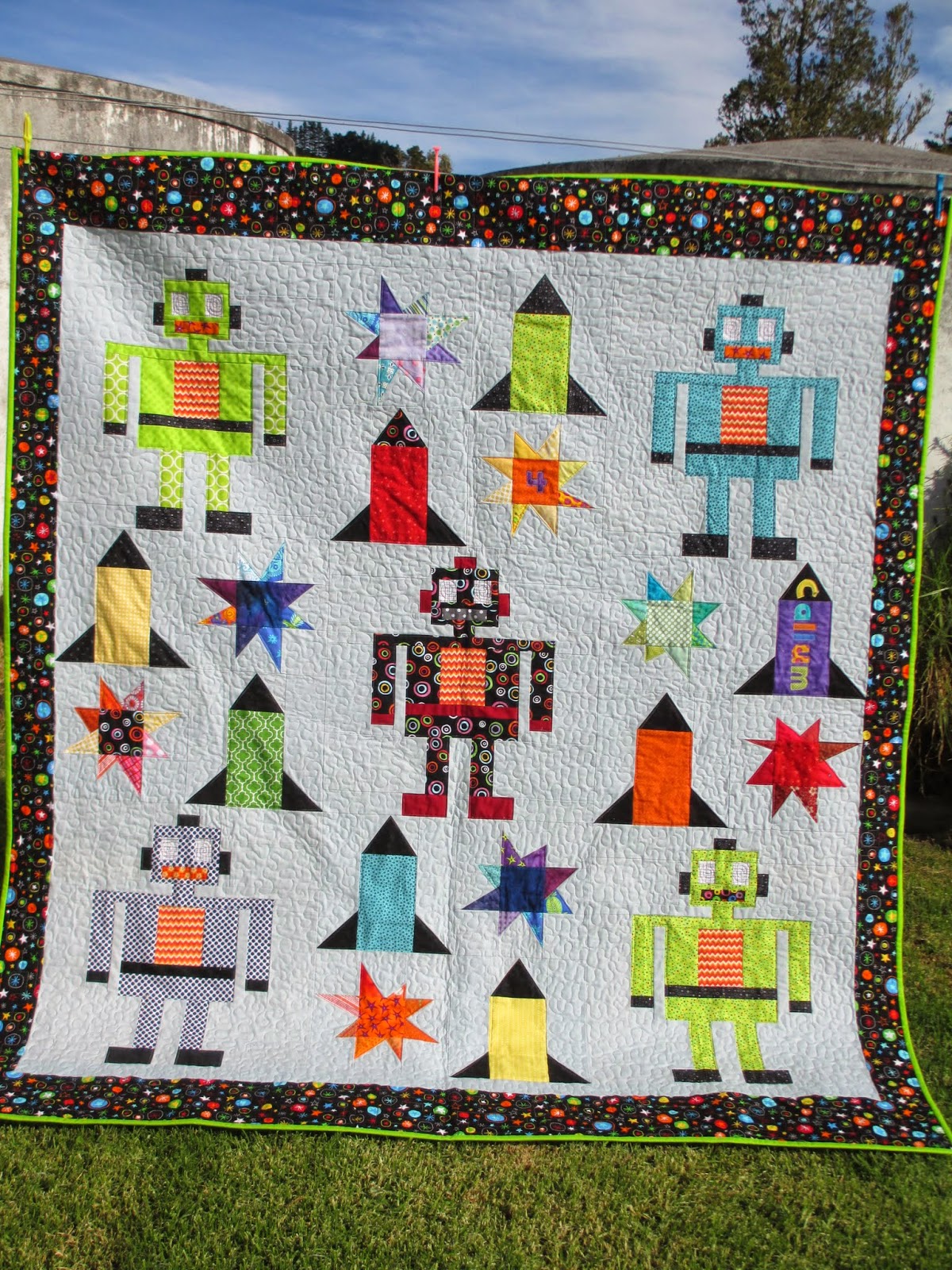 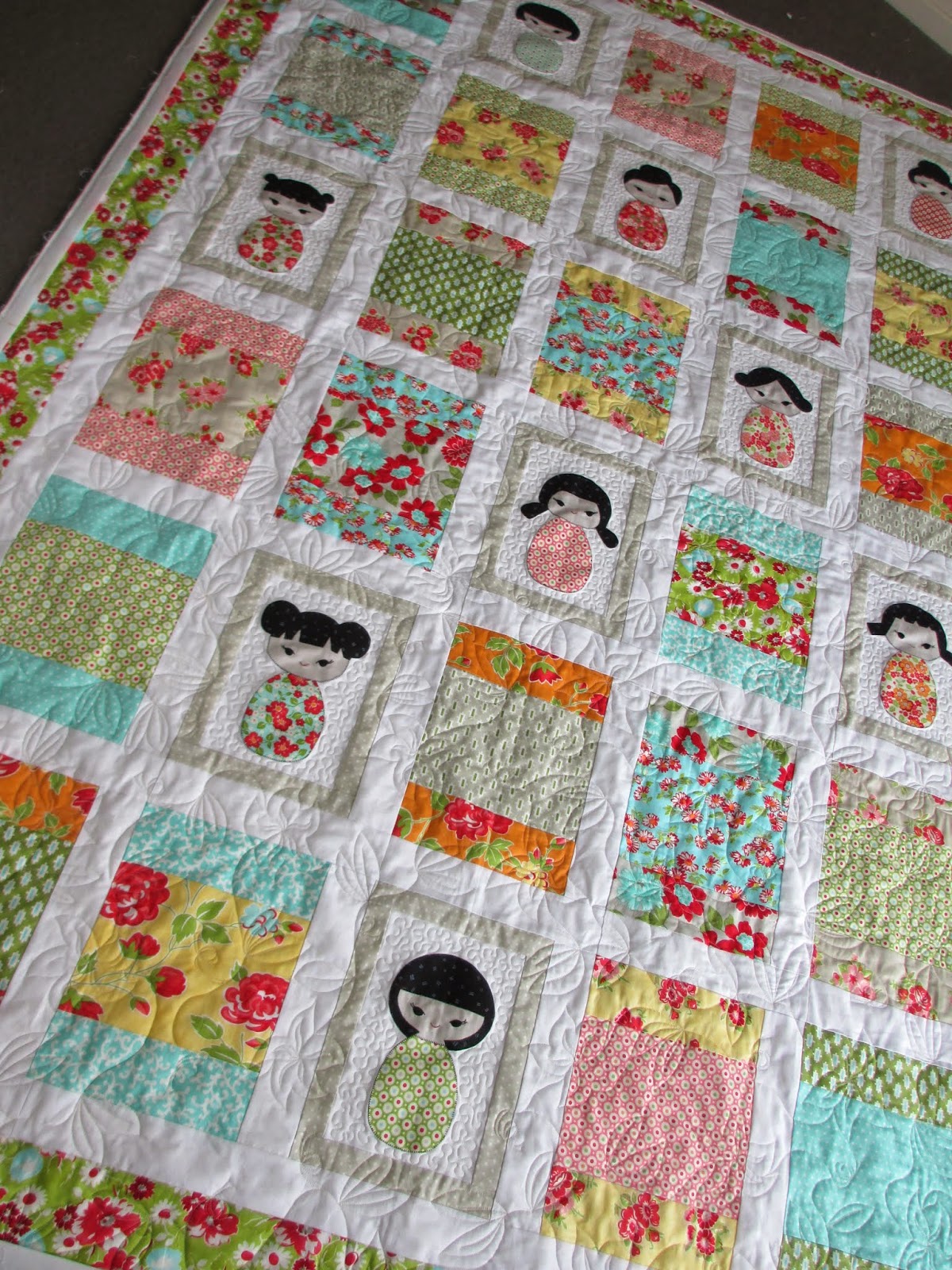 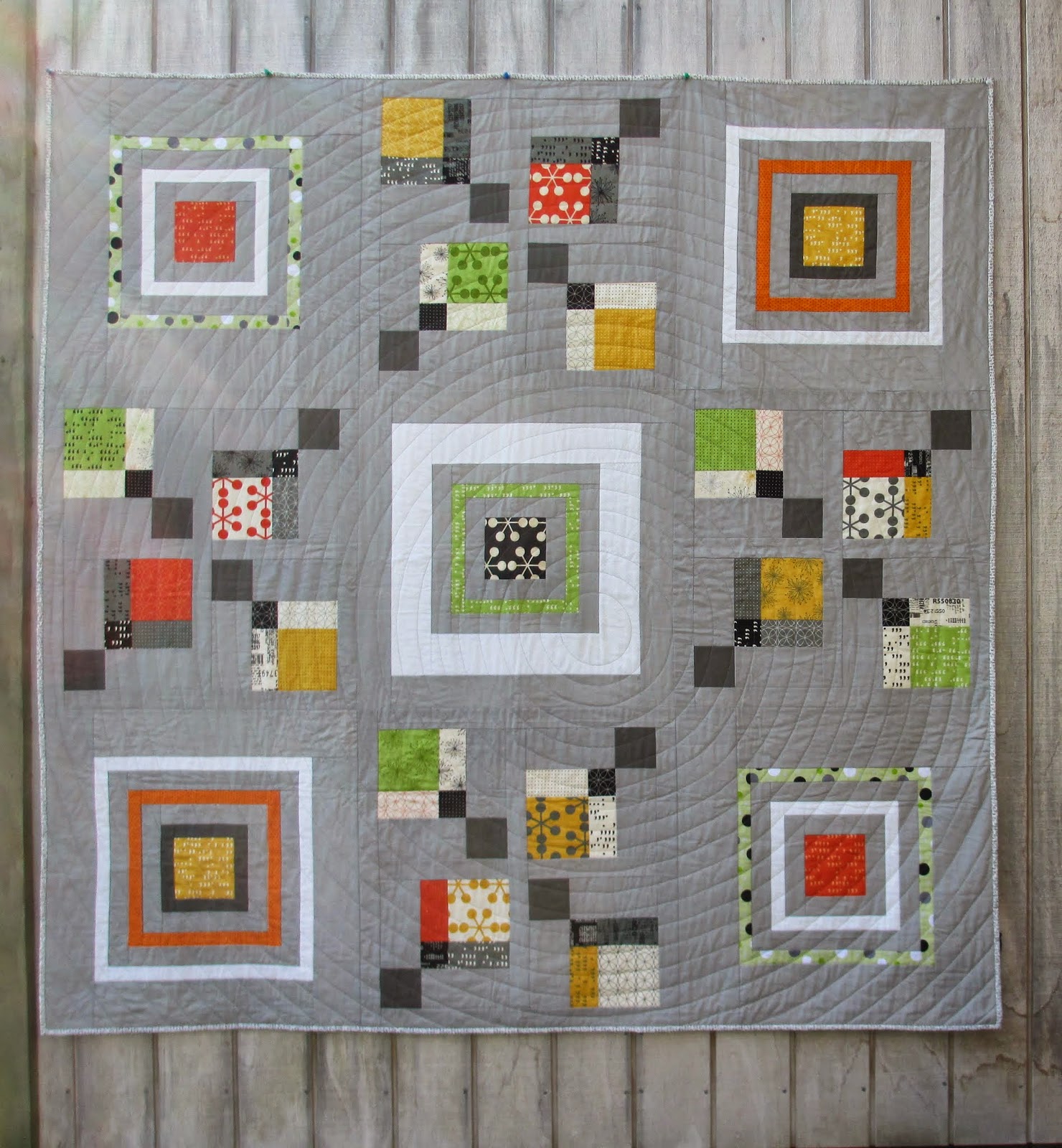 Quilts that are ALMOST on the completely finished pile/Binding still requiring stitching down:
Tokyo Subway 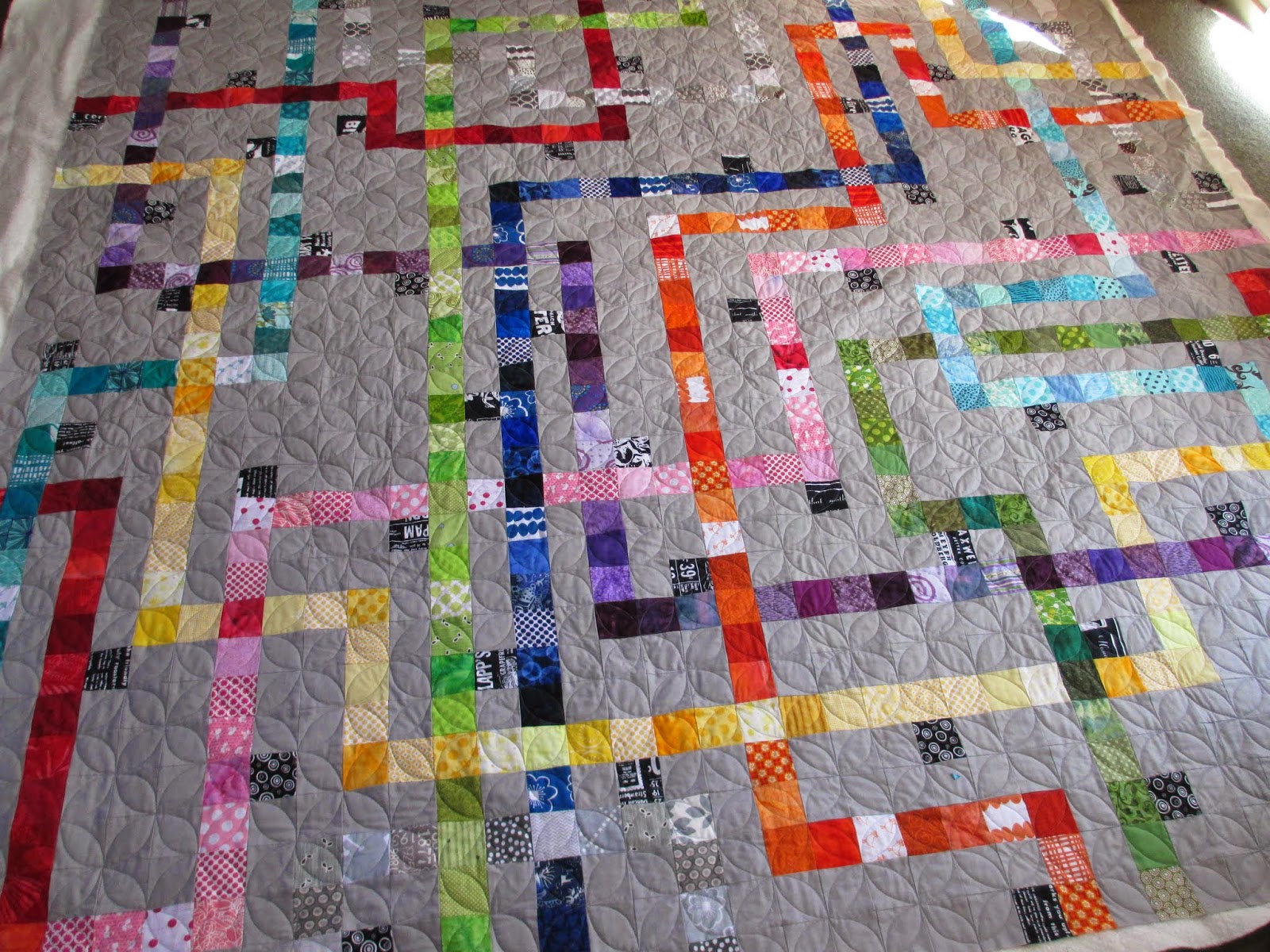 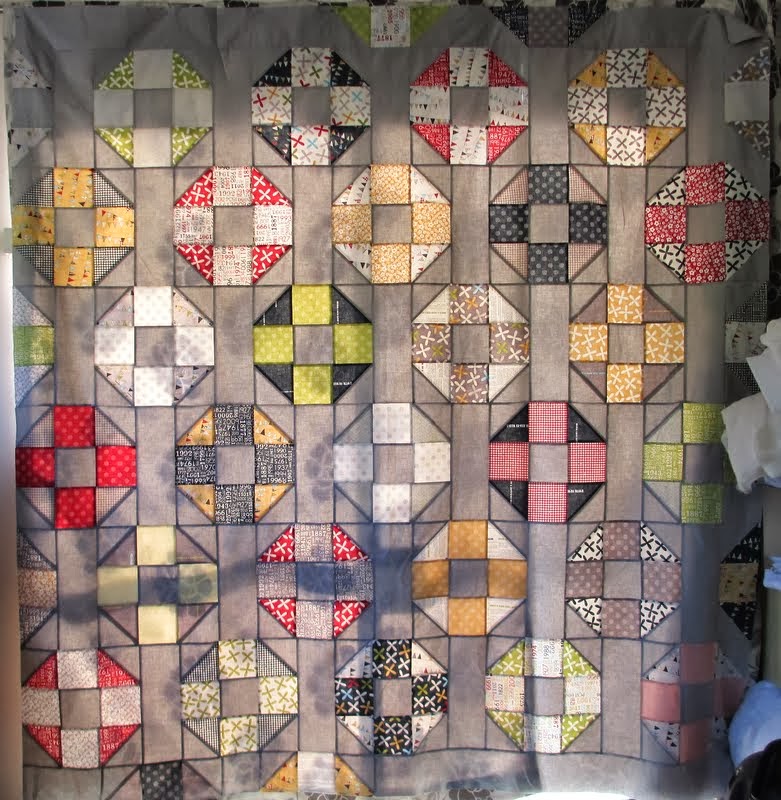 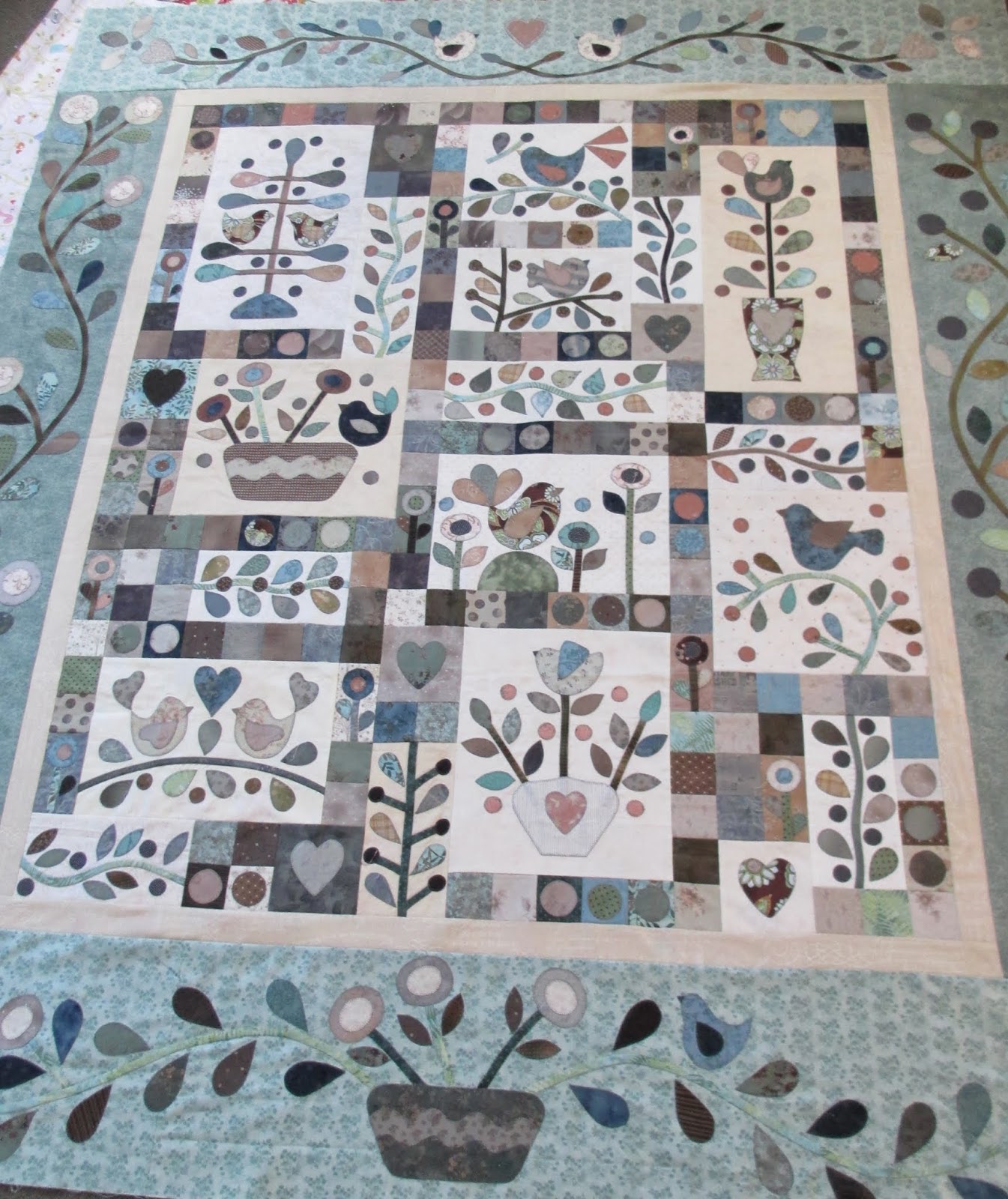 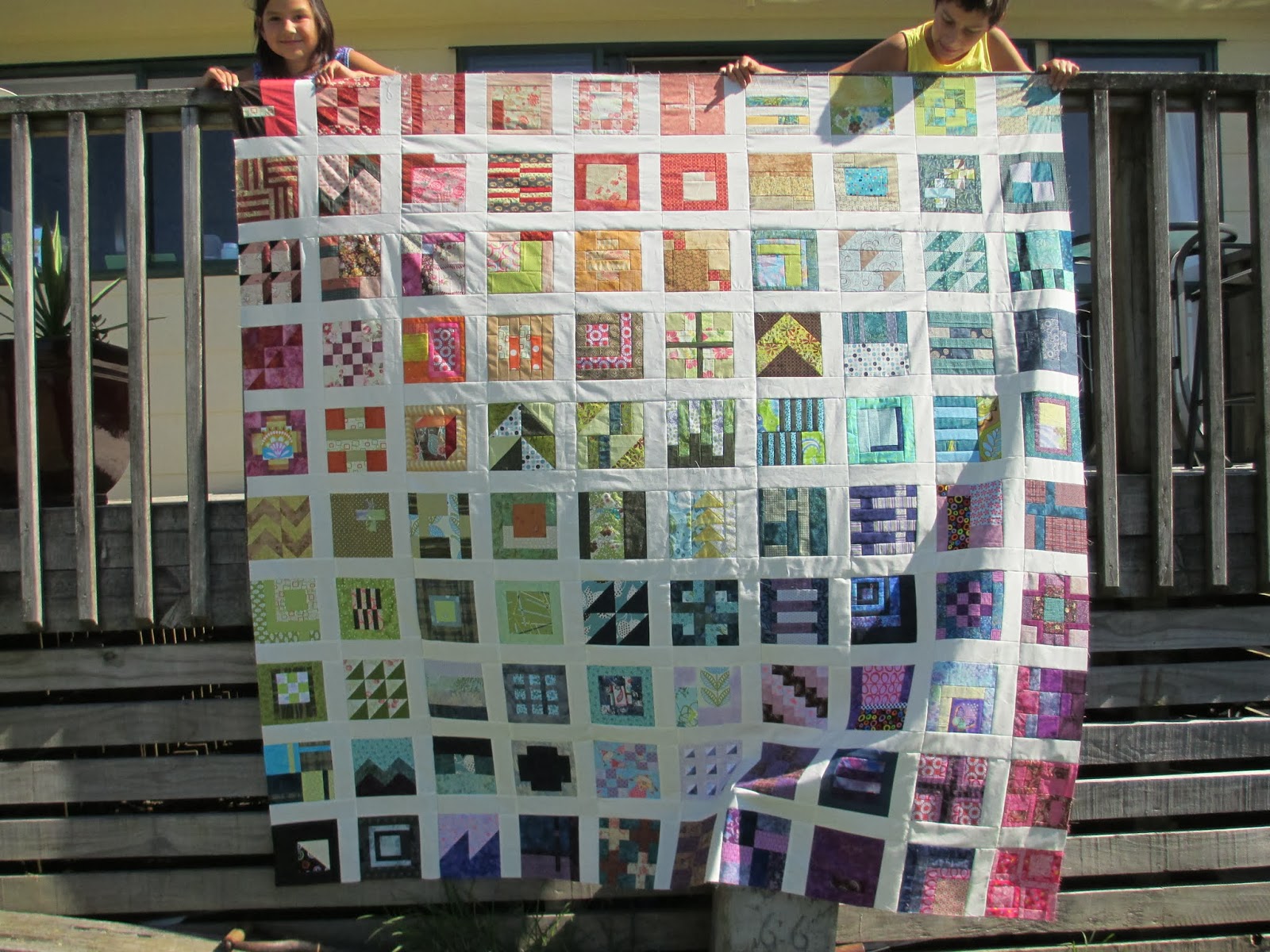 There are still plenty of old projects to work on... and I'm quite committed to making an impact on those throughout the rest of the year.  My quilting pile is seriously diminished compared to the start of the year - but there are still tops waiting for their turn to shine.  My major goals for the next few months are to finish the Friends Mystery Stitchery and get the Bluebirds and Berries quilt finished in time for The Country Yard's exhibition in October.  Four months may seem like a long time, but we all know it will disappear in a quilting heartbeat.

Good luck to those other brave souls who also jumped on the Diet bandwagon... I predict a massive upsurge in online sales in early July.
Posted by Suz J at 3:56 PM 6 comments:

Fitting in quilting around work and children isn't always the easiest.  And you don't always feel like doing the things you know you should be doing. 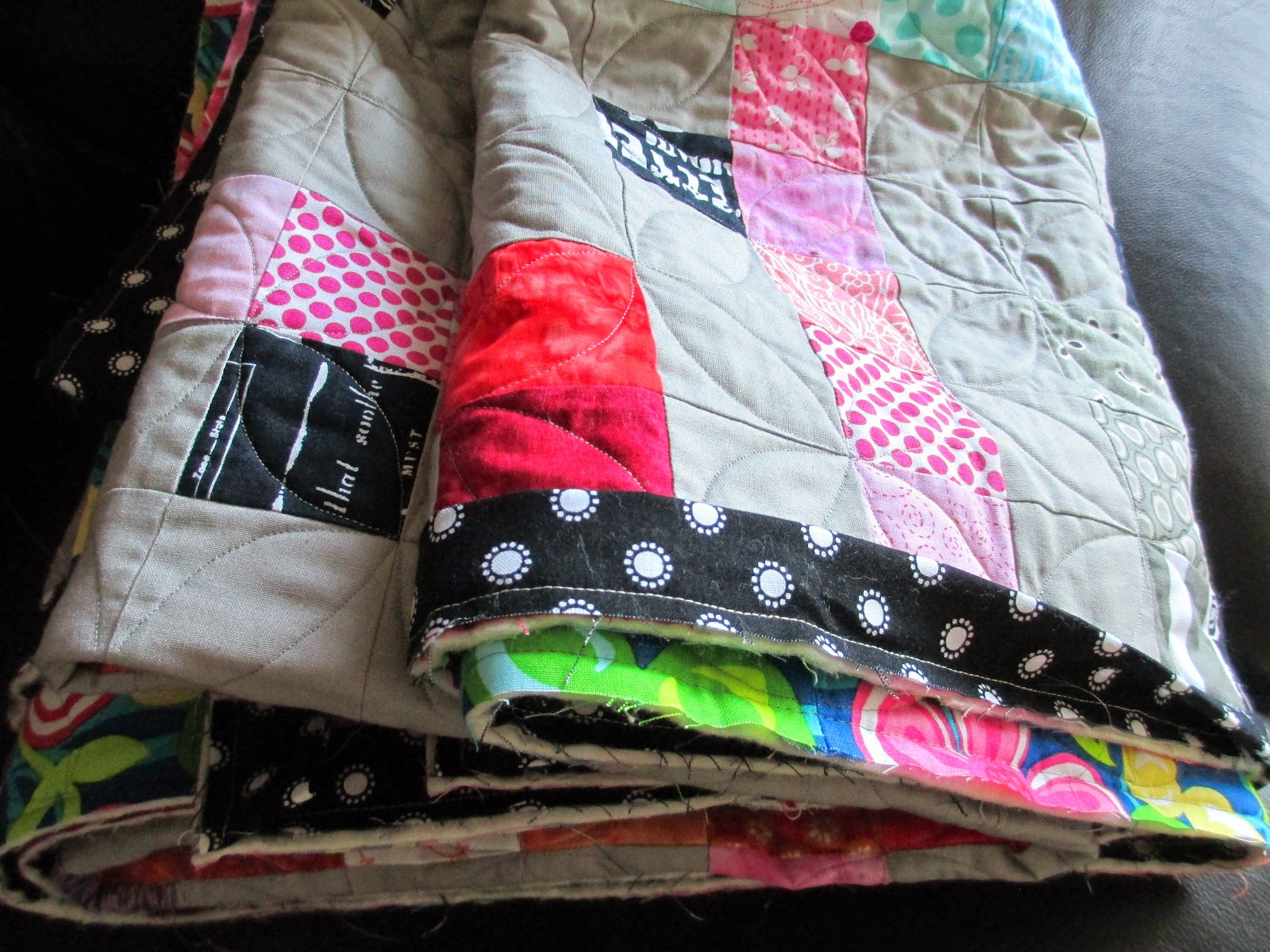 My mission lately has been getting the Tokyo Subway quilted.  DONE.  And bound.  ALMOST DONE.  But it wasn't without it's moments.  When you just finish quilting one of these big quilts, the last thing you feel like doing is dragging the whole thing around to add the binding.  And believe me, Monday after work (and after the parent/teacher conference after school), I really didn't feel like doing anything that looked like binding.  So instead I cut my strips, sewed them together and ironed the fold.

Tuesday is my work late day... and another parent/teacher conference after that.  So Nil progress.

Wednesday, I machine sewed the binding on, but left the tails unsewn... and finally Thursday, trimmed and joined the tails, sewed the last section down and trimmed the excess batting/backing.

Now it's just the hand stitching left to do!

Quilting really is just a series of steps.  Quilting on a large scale just takes longer... but it's still basically the same steps.  This is really just putting off starting the hand stitching :0)

She Quilts therefore She Lives

A bit of a longer break than normal... not to say that I haven't been quilting, just that it's been rather monotonous... and combined with rather bleak weather conditions over the past couple of weeks, and a rather unhealthy looking pile of washing - blogging has just taken a bit of a back seat.  But I'm back :0)

I rather lost interest in the quilting pattern somewhere between square 1 - 100. 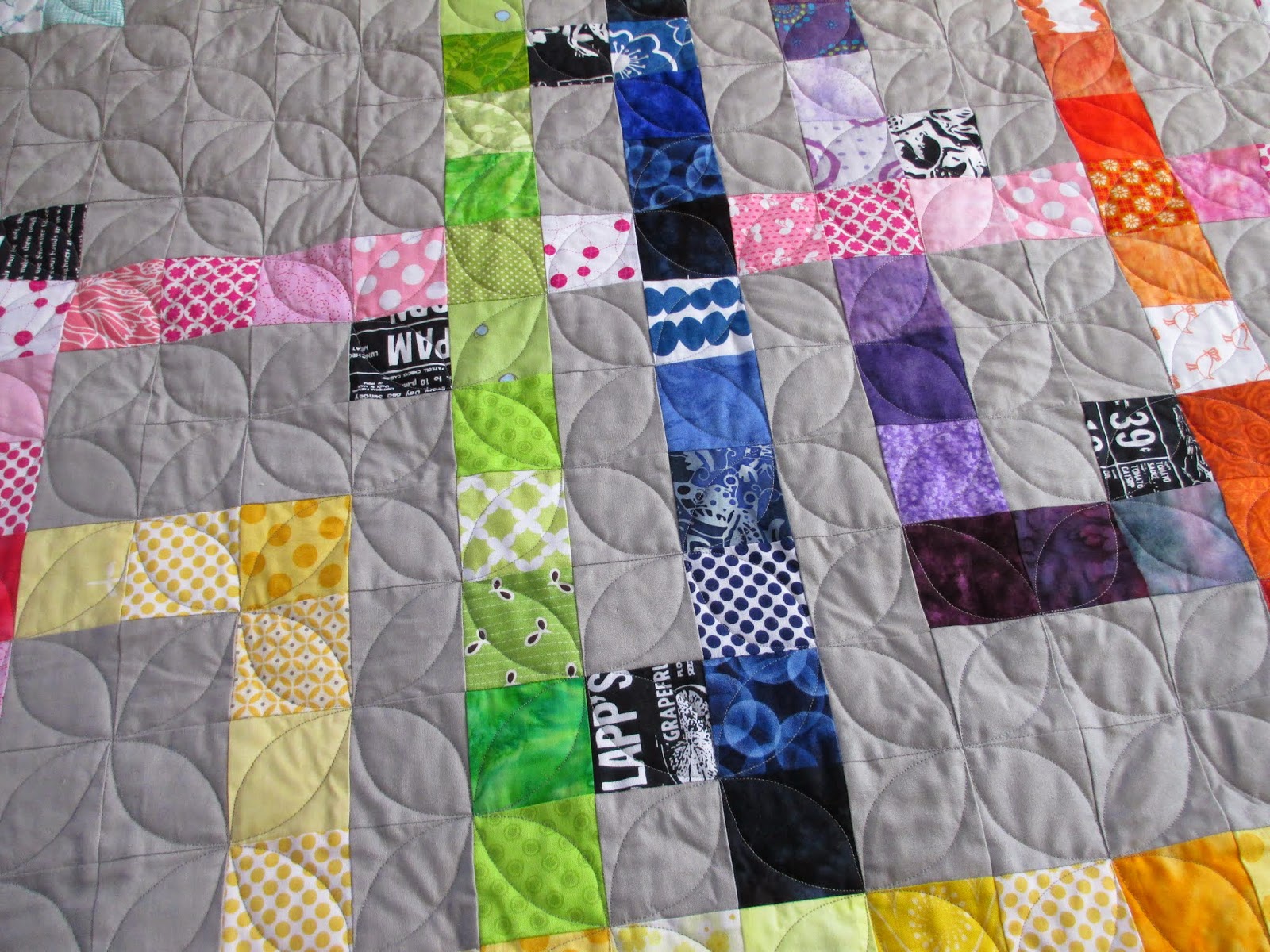 Of course, there were 1600 squares that needed to be filled, with exactly the same pattern.  I've discovered that it is not only poor posture that makes your shoulders ache while quilting - when you are doing really repetitive stuff, there is not enough variation in your movements... and you just sort of seize up.

I've also cut my binding strips - and look forward to attaching these next week. My Amy Gibson Sugar Club blocks have been winking at me... 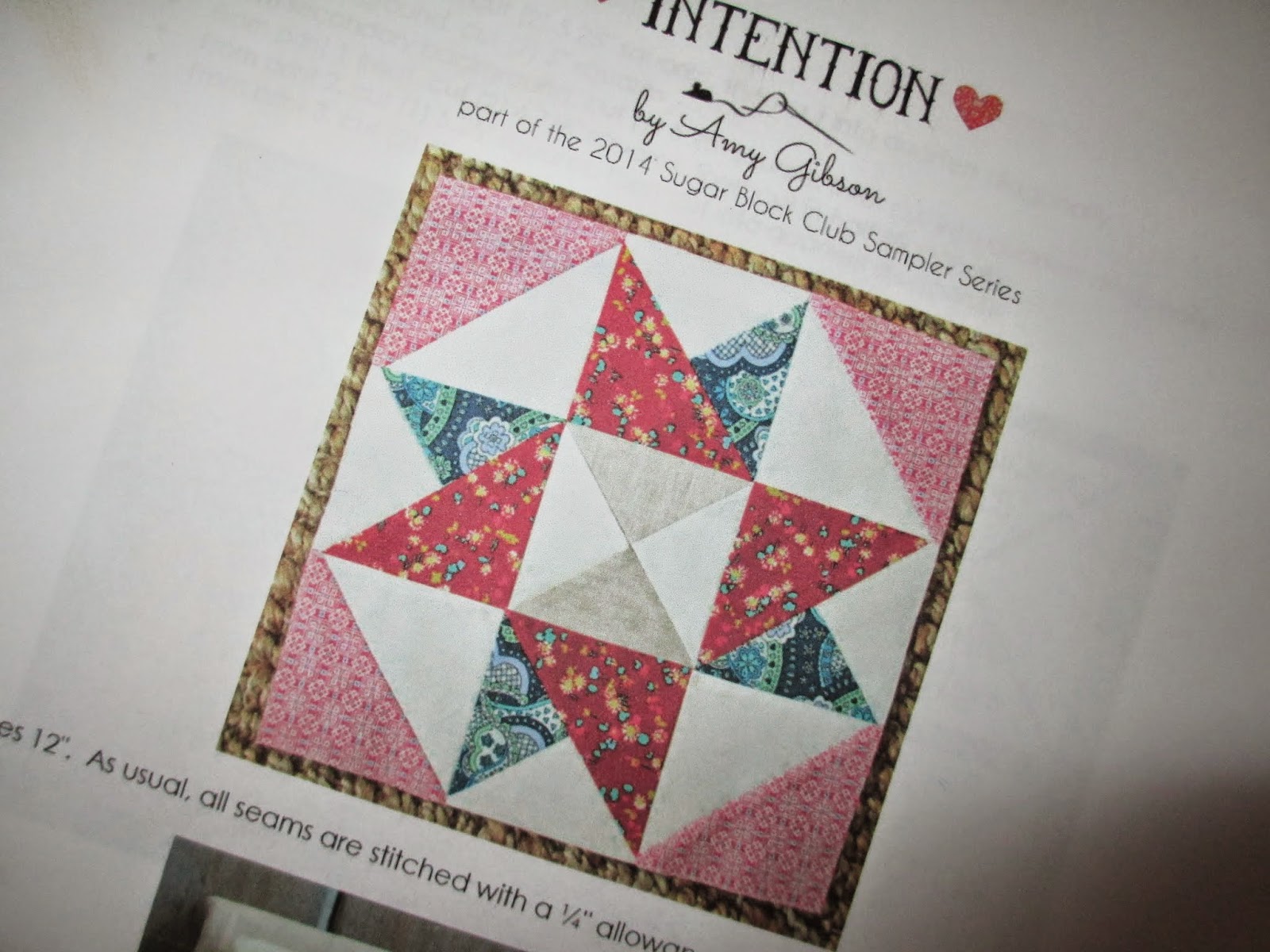 and the leftover Japanese Lady Quilt fabric (a variety of Bonnie & Camille fabrics)... were just itching to be cut up and started.  Did I mention that I am officially off the new fabric/new projects diet?  Luckily it finishes at the end of the month anyway.  I think this is going to be really pretty. 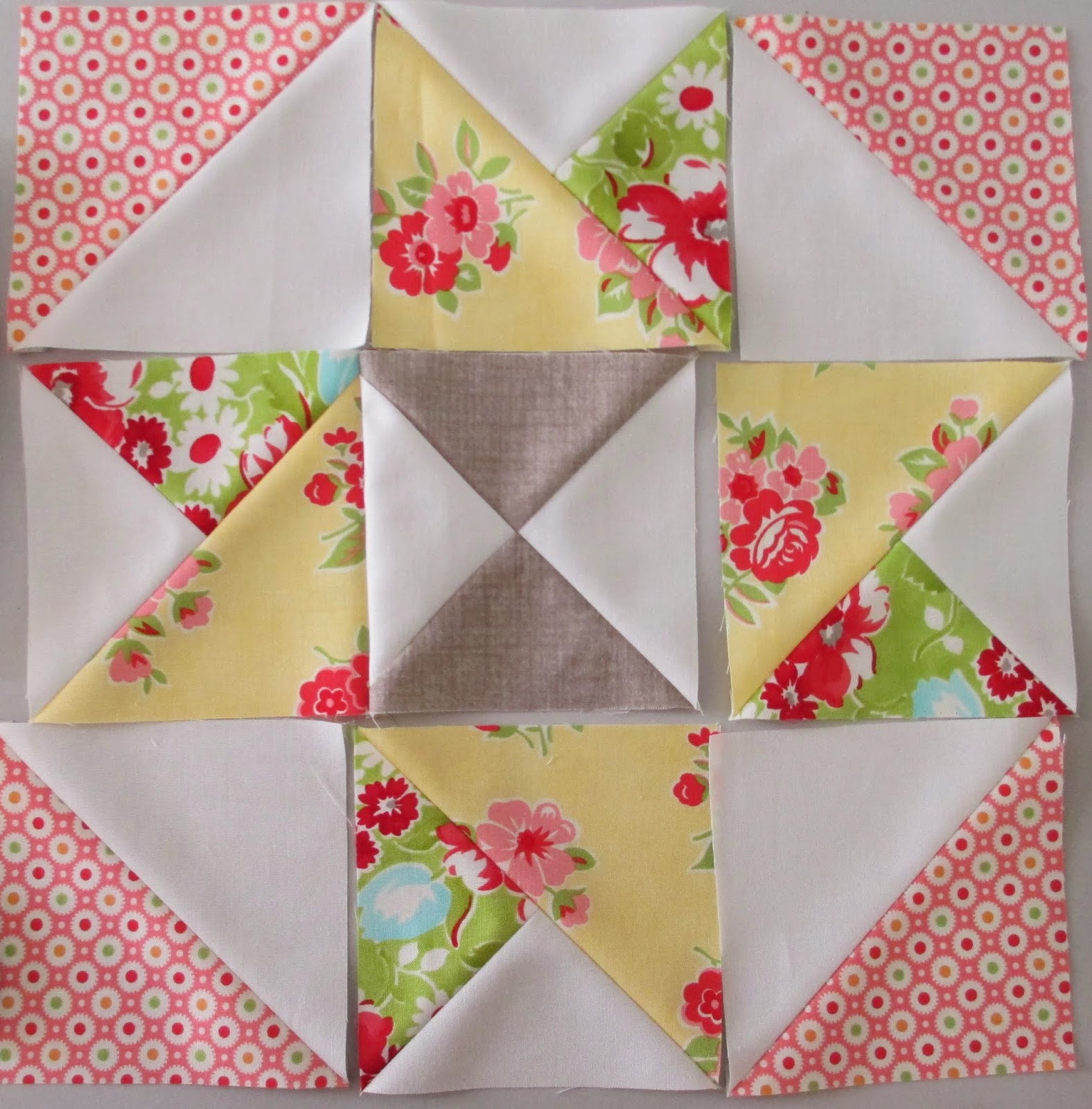 The Supernova blocks just keep growing... on the design wall at least. 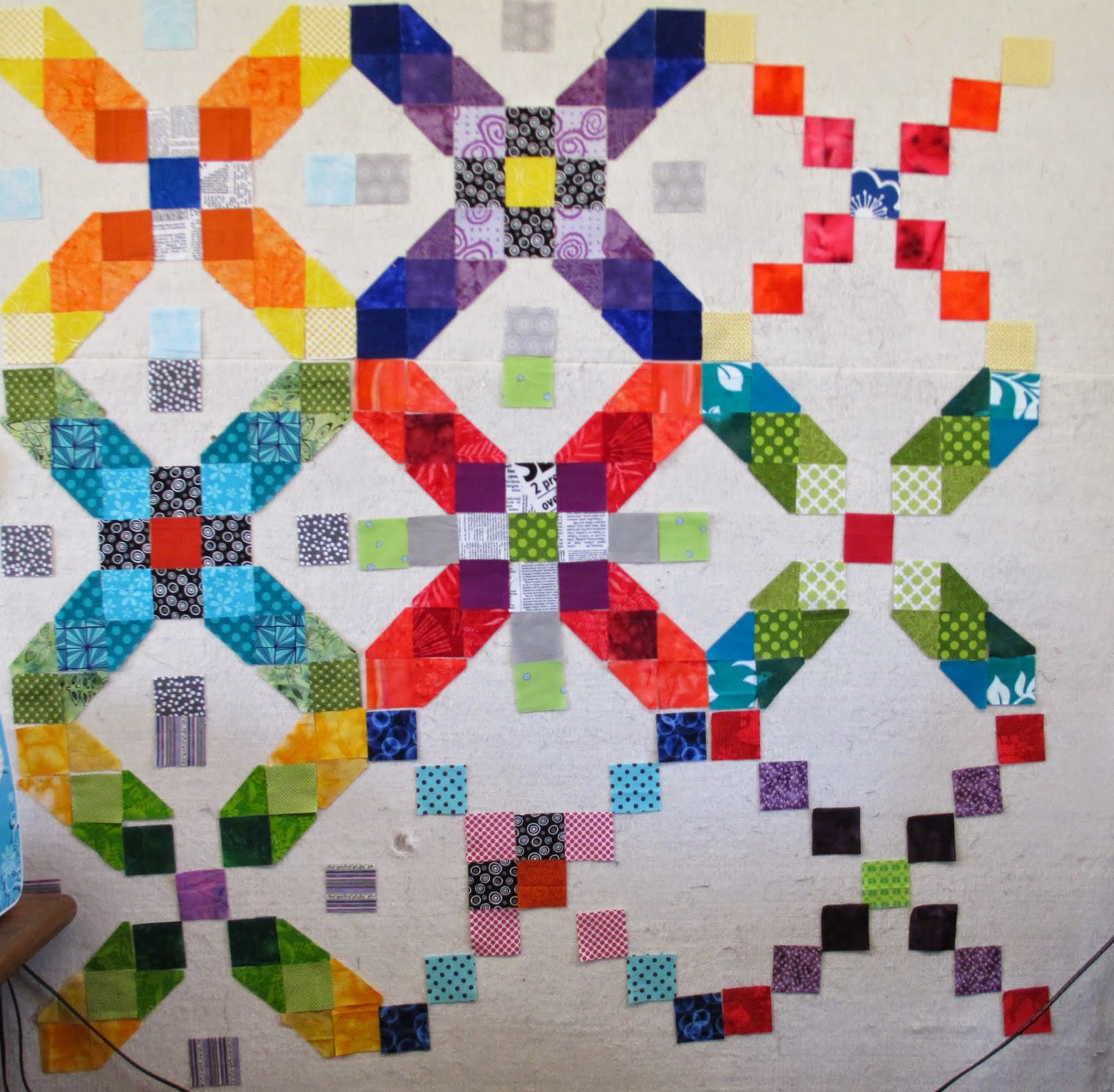 It has been a real challenge to get the leftover squares from the Tokyo Subway to fit into the colour scheme that I had chosen.  It would have been easier if there were more orange squares left... but with this combination, and stretching the colour scheme guidelines, it should work out fine.  Now I just need to finish cutting up a few more triangles, decide on a background colour (one vote so far for light... any other suggestions?), and actually start sewing all these little bits together.

Cuddling up in front of the fire has been conducive to getting some stitchery blocks finished.  I know, it's hard to believe I've left these unloved for so long... they really weren't that bad. 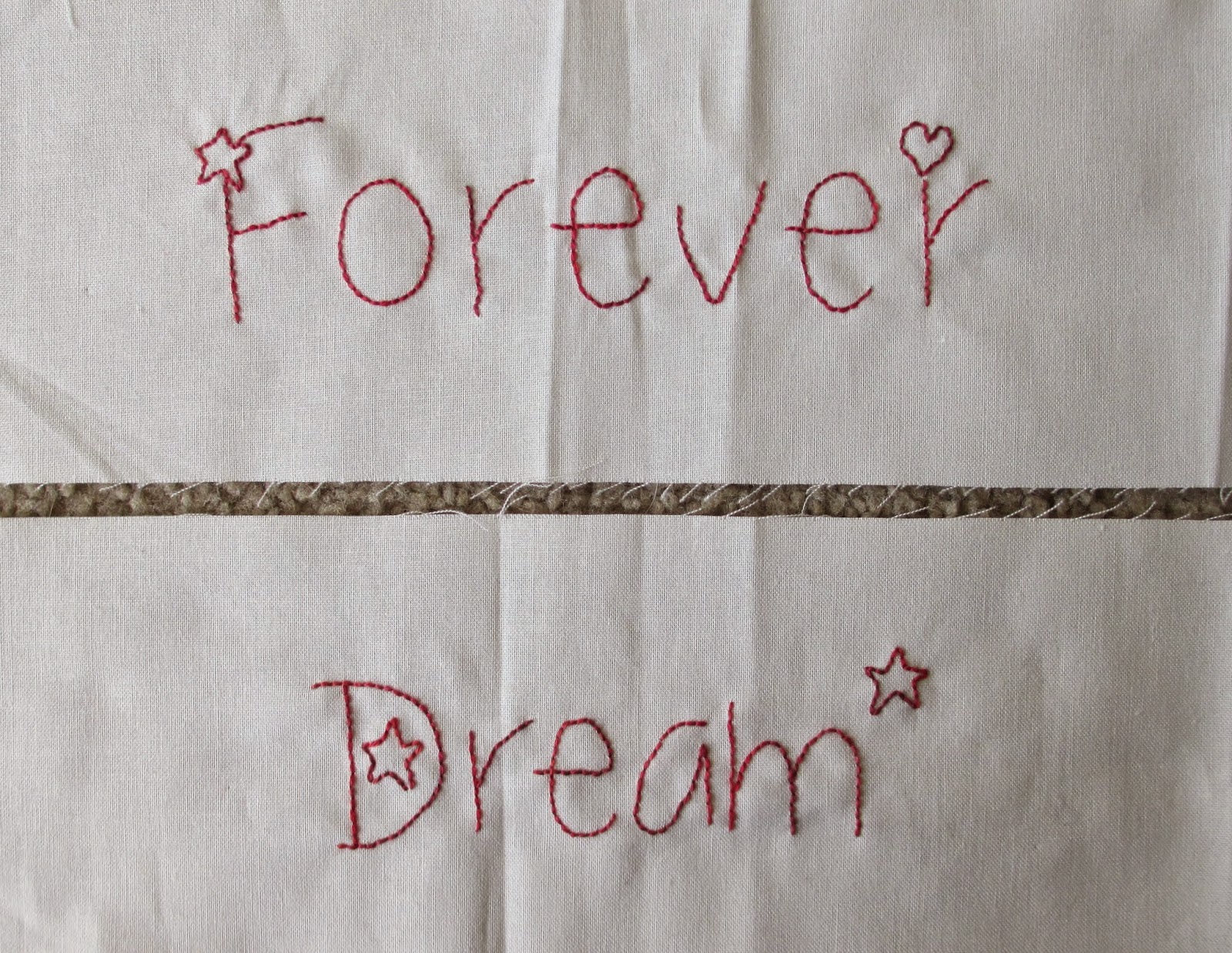 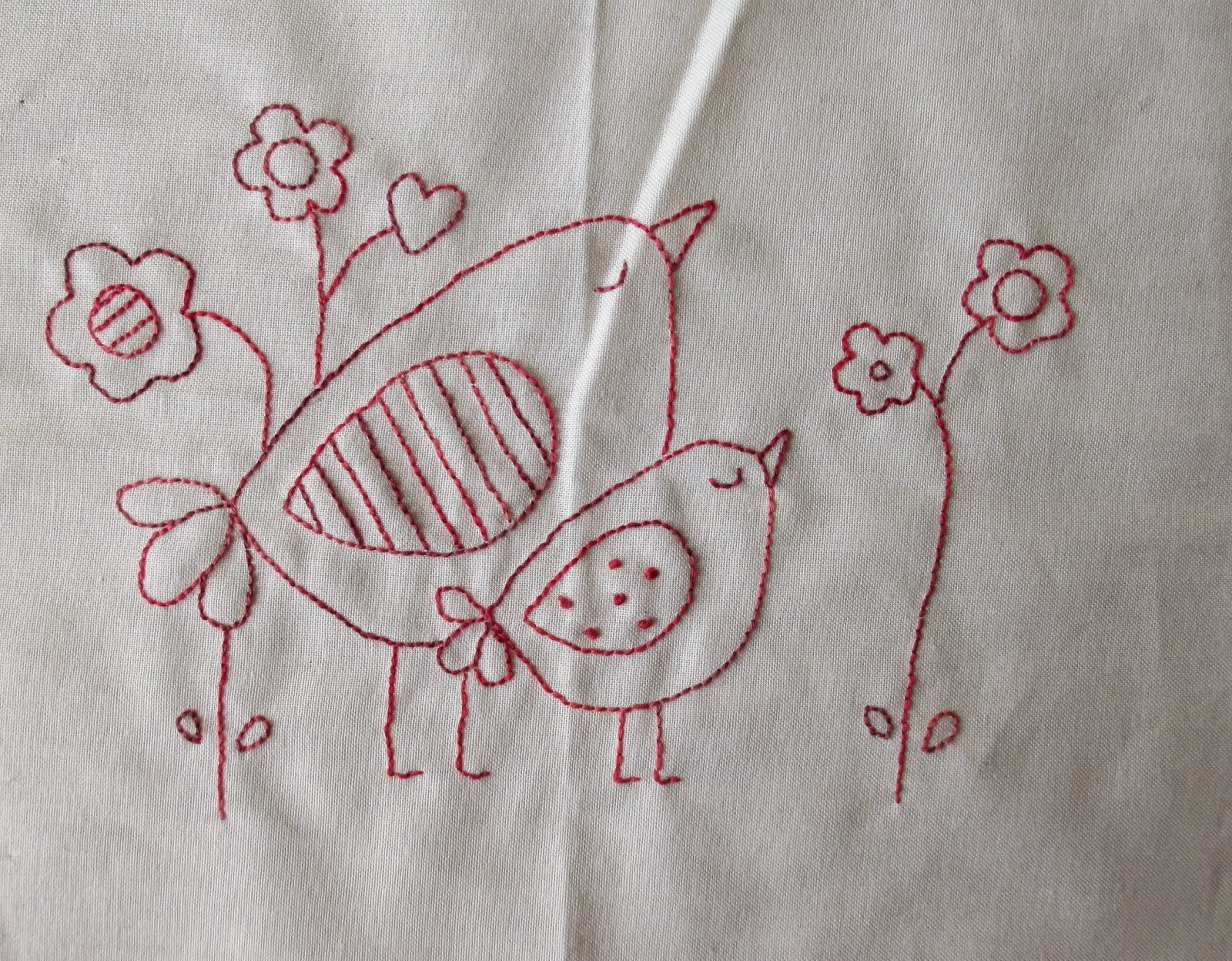 The first part of Block 8 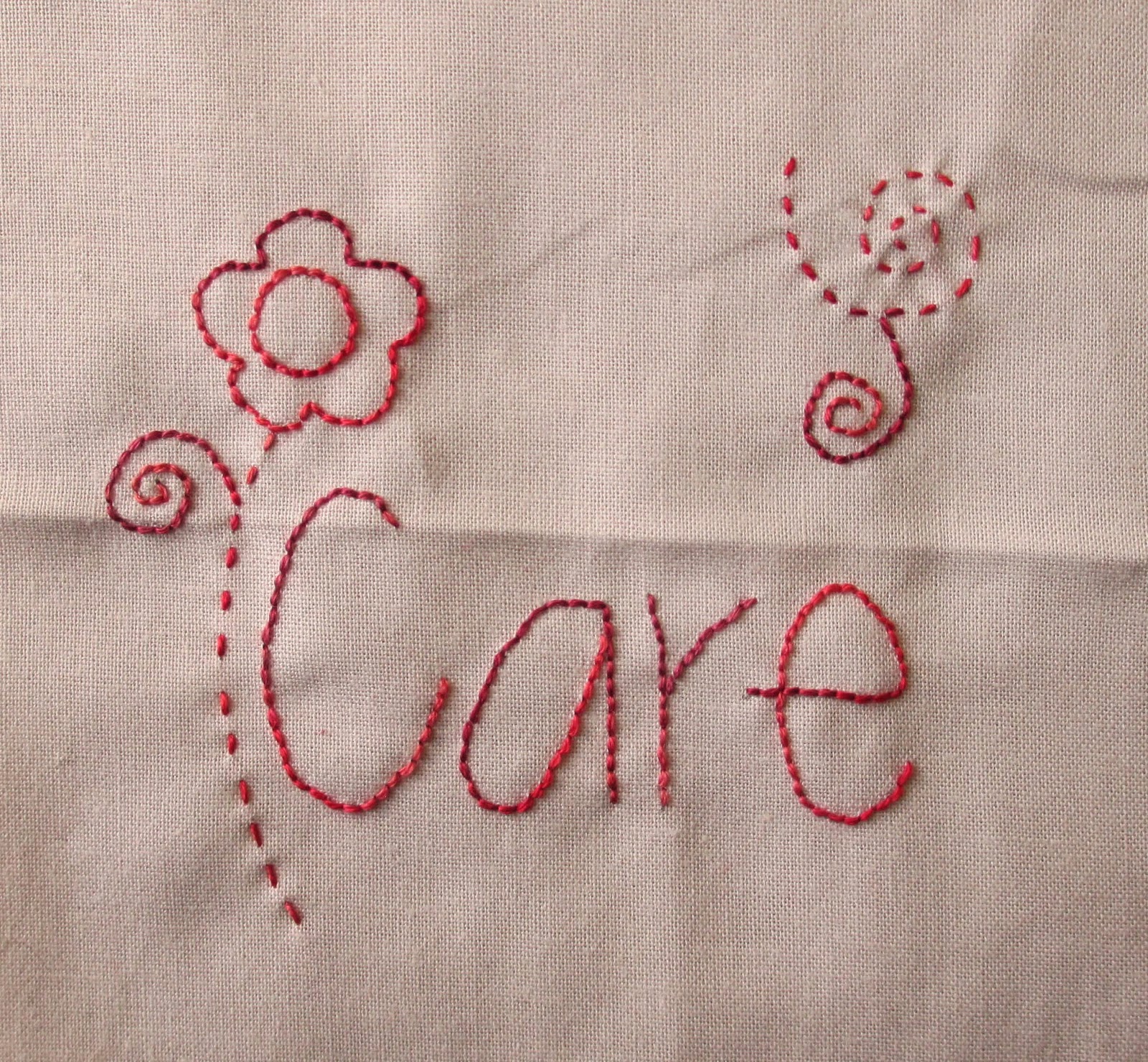 That just leaves Block 8 Part Two and Block 9.  Then the construction can start.  No-one will be in the least surprised that I'm thinking about putting it together a bit different from the instructions.  However my hopes to do some designing in EQ7 have been dashed as I am having difficulties in getting the programme to run on my computer.  It has been a most frustrating weekend.

Although I did get new slippers... 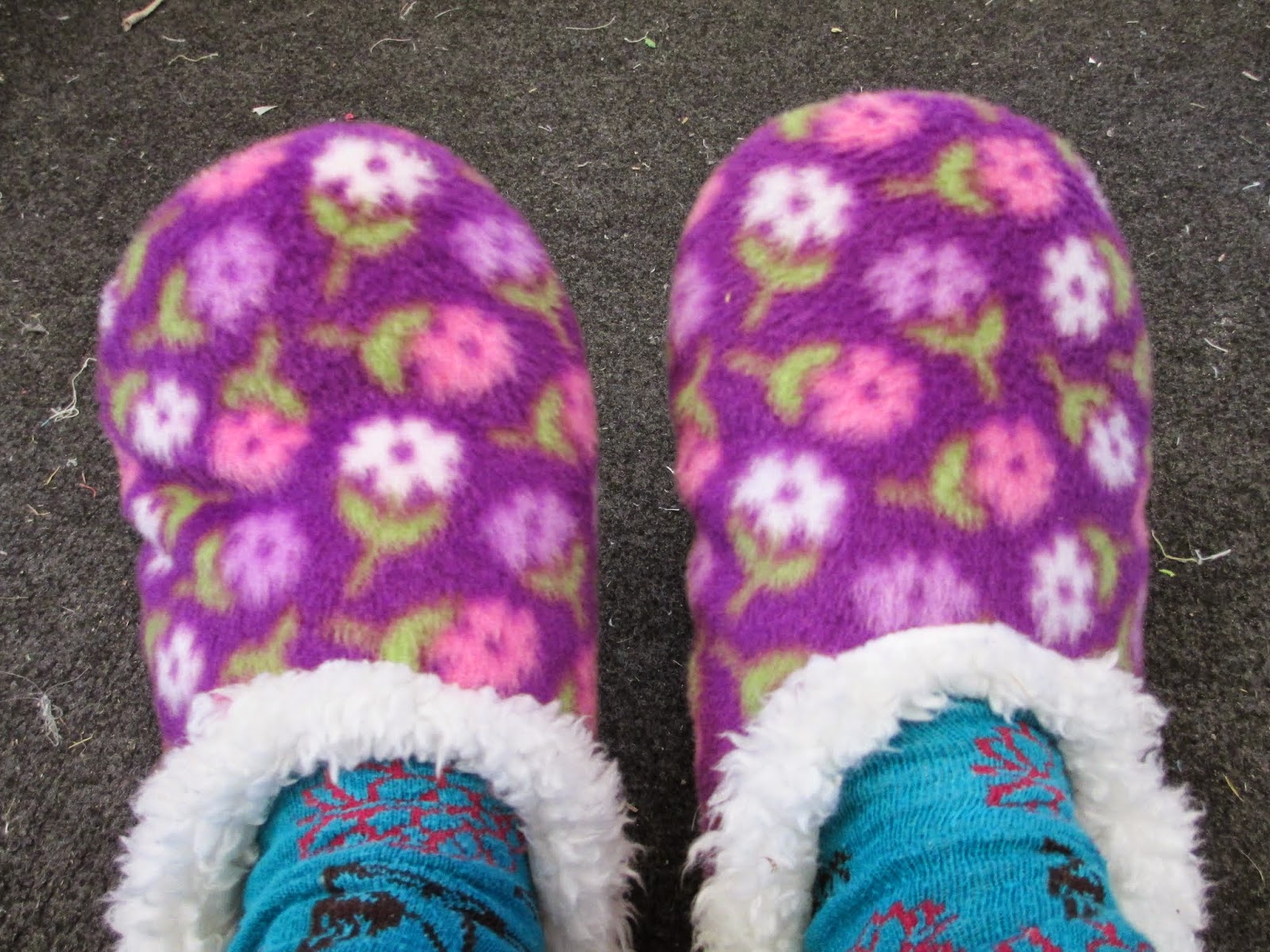 ... which are nice and warm and just a wee bit whimsical.

Well, that's me for the week... what is everyone else up to?

Some days are rocks...

Some days are diamonds.

And some days are just somewhere inbetween.


It may well be that it will become lost in the masses of rings by the time this quilt is finished.  But can I risk it?  Looks like Mr Seam Ripper will be called into action for this one. 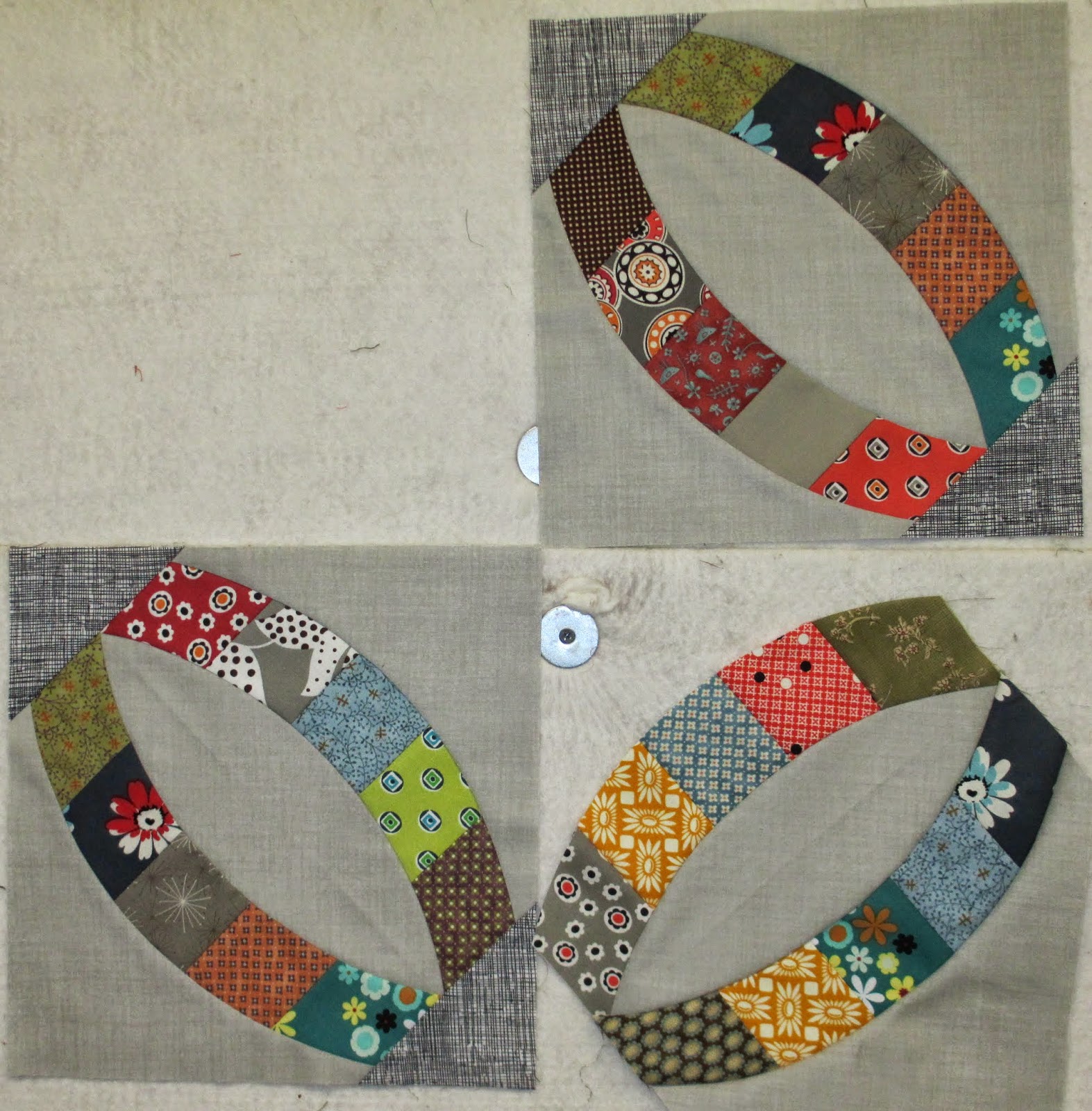 And no, this doesn't appear to be a melon shape... moral of the story, don't stop in the middle of a curve, even if your husband asks a question that needs an immediate answer.  I think this is the rock part of the day :0) 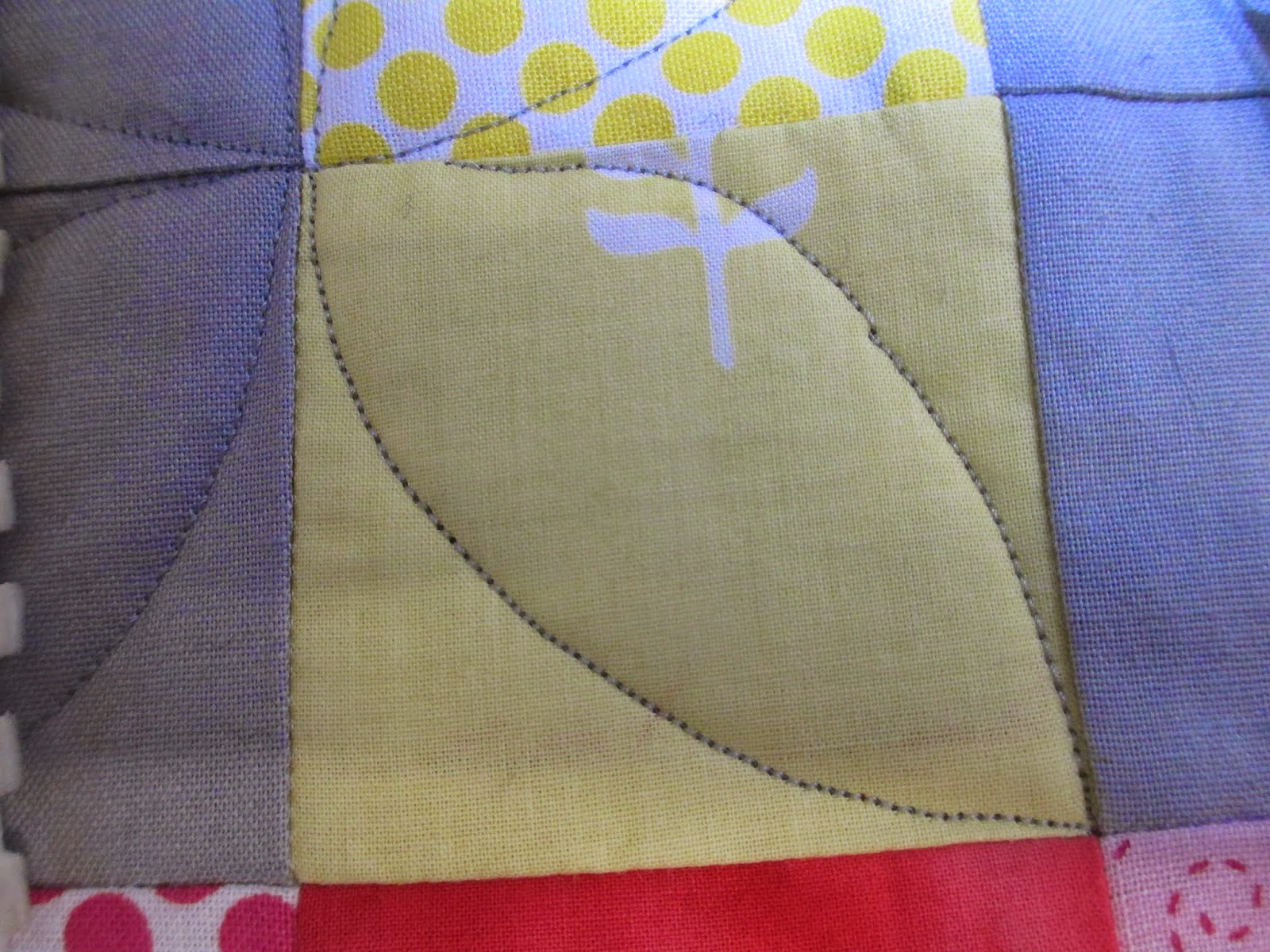 The FMQ foot is back in place and I'm just over halfway quilting the third quarter.

Moving onto the diamond part... a quick squiz at what's on the design wall at the moment.  I would urge anyone contemplating constructing a design wall to go for as big as you can fit.  It will never be big enough but we all know bigger is definitely better in many areas of life (like chocolate bits, bench space and stash cupboards).  And we also all know that the bigger it is... the more you will try and fit on it.

I am a firm believer that quilting represents my creative response to what is going on in my life, or the world.  Whether it's winter, or work or kids... something has been triggering a brighter, uplifting palette of colours.

Three Feathered Star blocks down... only 6 more to go!  I still love these, and hopefully no-one gets bored with the occasional progress.  These will be set in a sashed nine patch, with contrasting cornerstones.  Can you see it?  And no, I haven't decided how I'm going to quilt it yet! 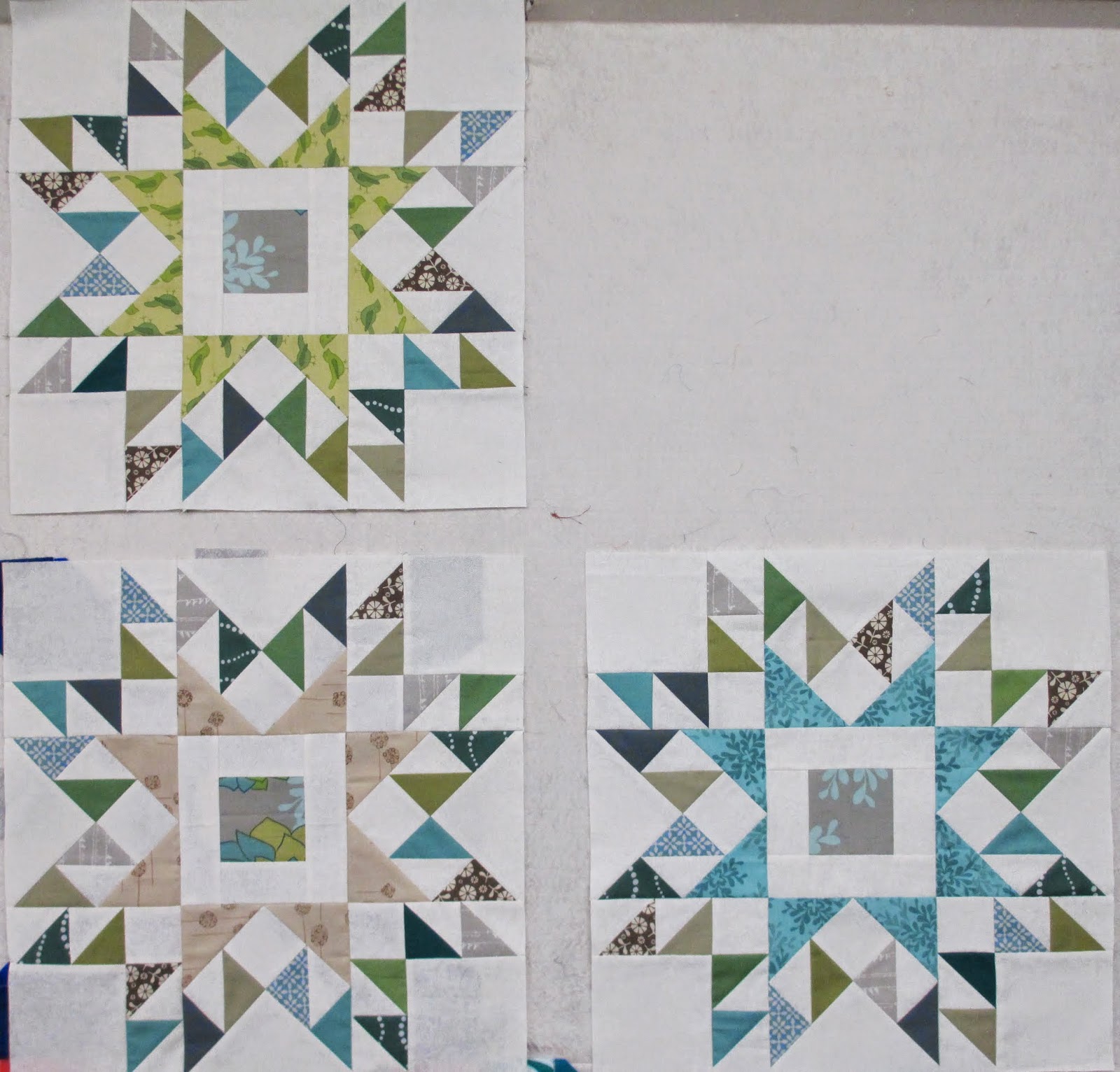 And  as promised, I did unearth my Mystery Stitchery blocks... which were temporarily lost.  It seems I'm up to block 6 out of nine.  There are some quite simple stitcheries to be done, with a couple of more complex ones... so there is no reason at all why I can't get some real progress done on this one over the winter months.  As the Mystery is well and truly over, I have the final layout and fabrics - all lovely French General - I have all the incentive I need to get this one at least up to the piecing stage. 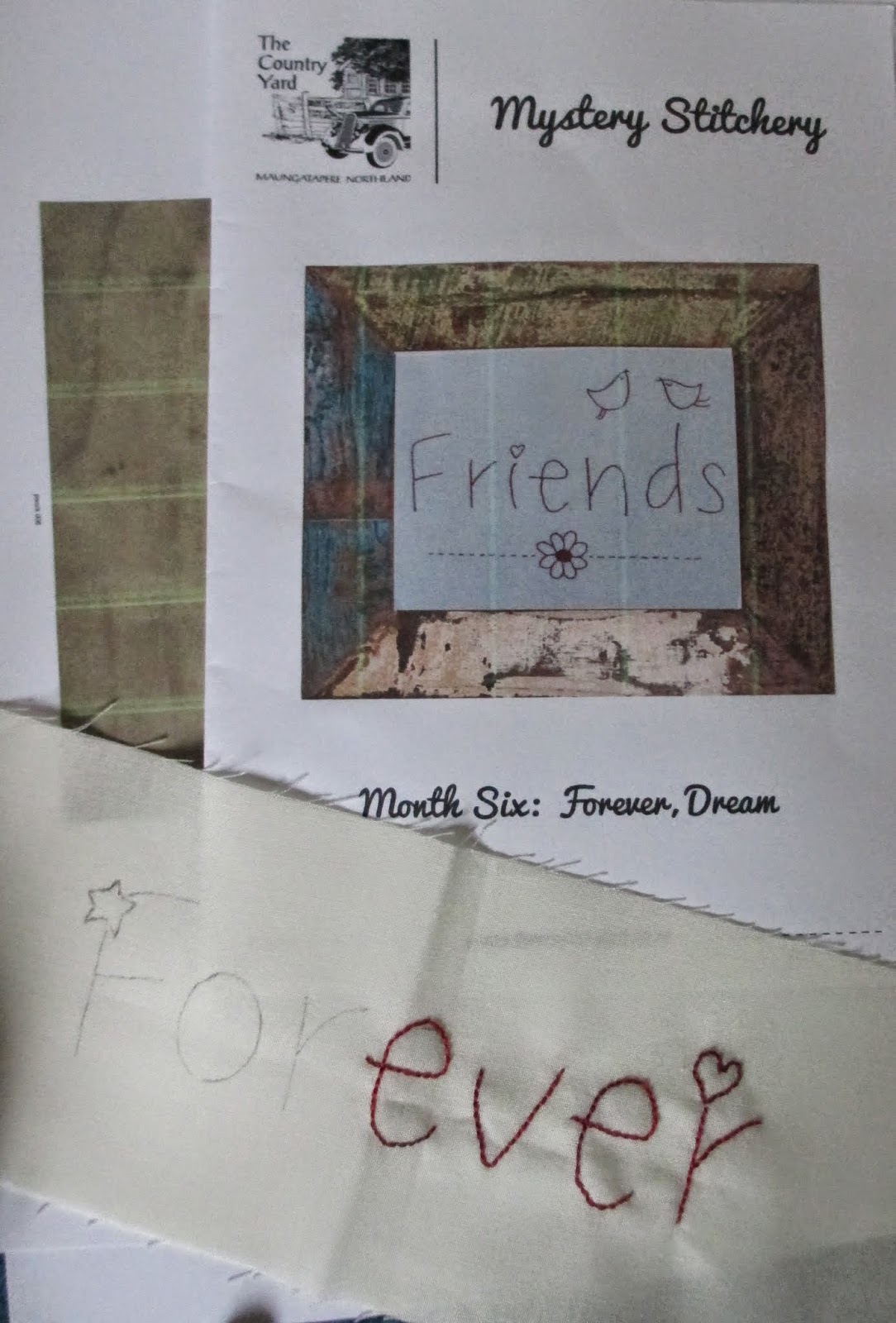 Having a pretend new project was only one step away from having a real new project.  Like anyone with an addiction... it's impossible to stop at one... or two... this may well be the end of the Project Diet.  But on a positive note... it is June... that's a whole 5 months longer than I thought I'd last!

Before I embarked on the new project, I decided to treat myself to another Feathered Star block - I just felt like having a break from all the FMQing - and a bit of careful and precise piecing was just the ticket.  My LQS The Country Yard has a monthly stitching Saturday - so along with a few of my monthly Saturday quilting buddies, we enjoyed a lovely day out, stitching, talking,and catching up with Kerryn newly returned from Quilt Market.  I took my cut out squares and triangles, and started piecing up some of the units.

No trip to a fabric shop is complete without at least a teeny bit of retail therapy.  I took along some of my "one day this is going to be a quilt" bundles and matched up some perfect background fabrics.

It was only a short hop skip and jump to cutting up some of those fabrics and FINALLY using my new Simple Curves curved ruler and mock Double Wedding Ring pattern.  I'm amazed that I hung out this long! 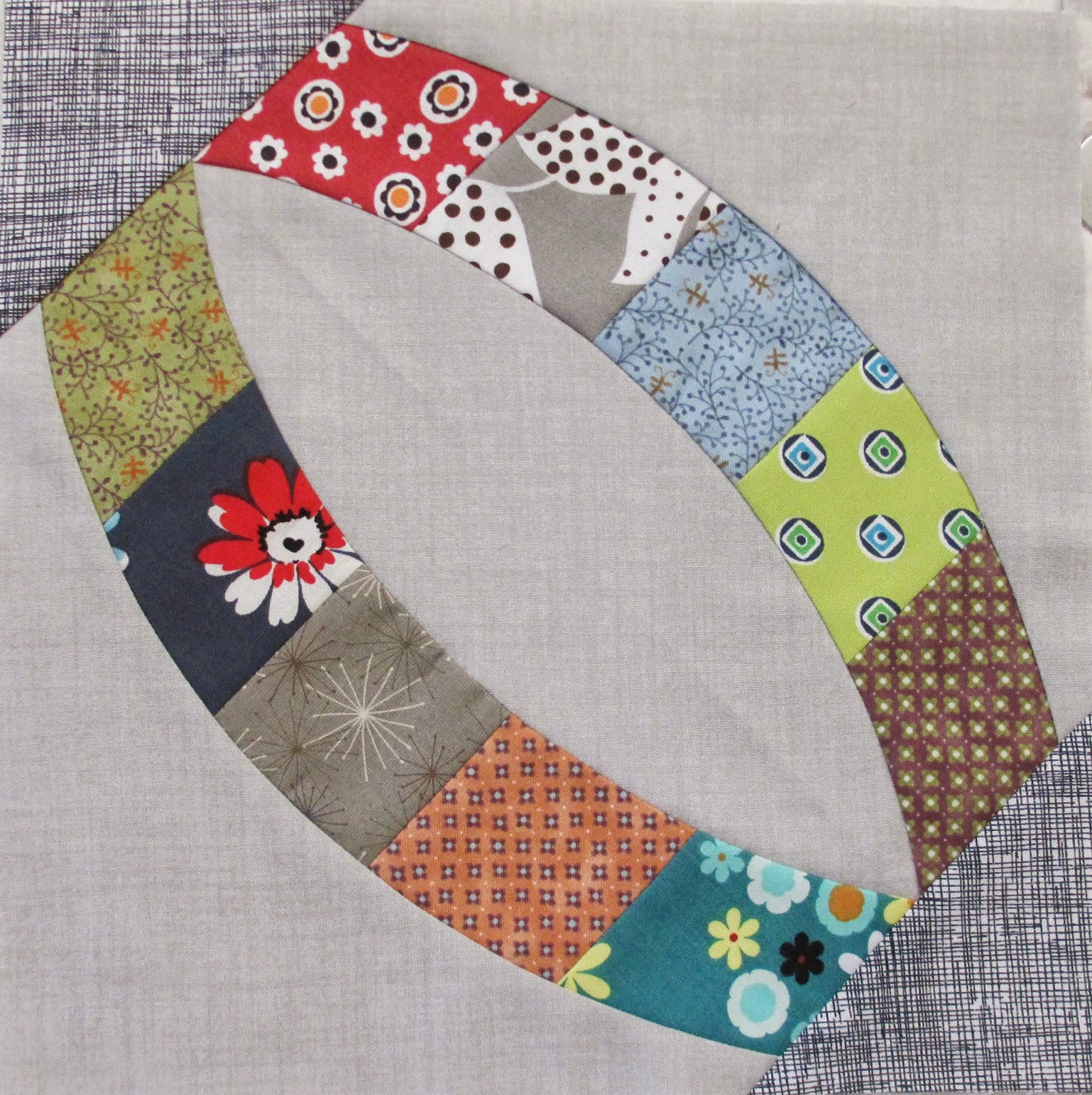 And then there was TWO! 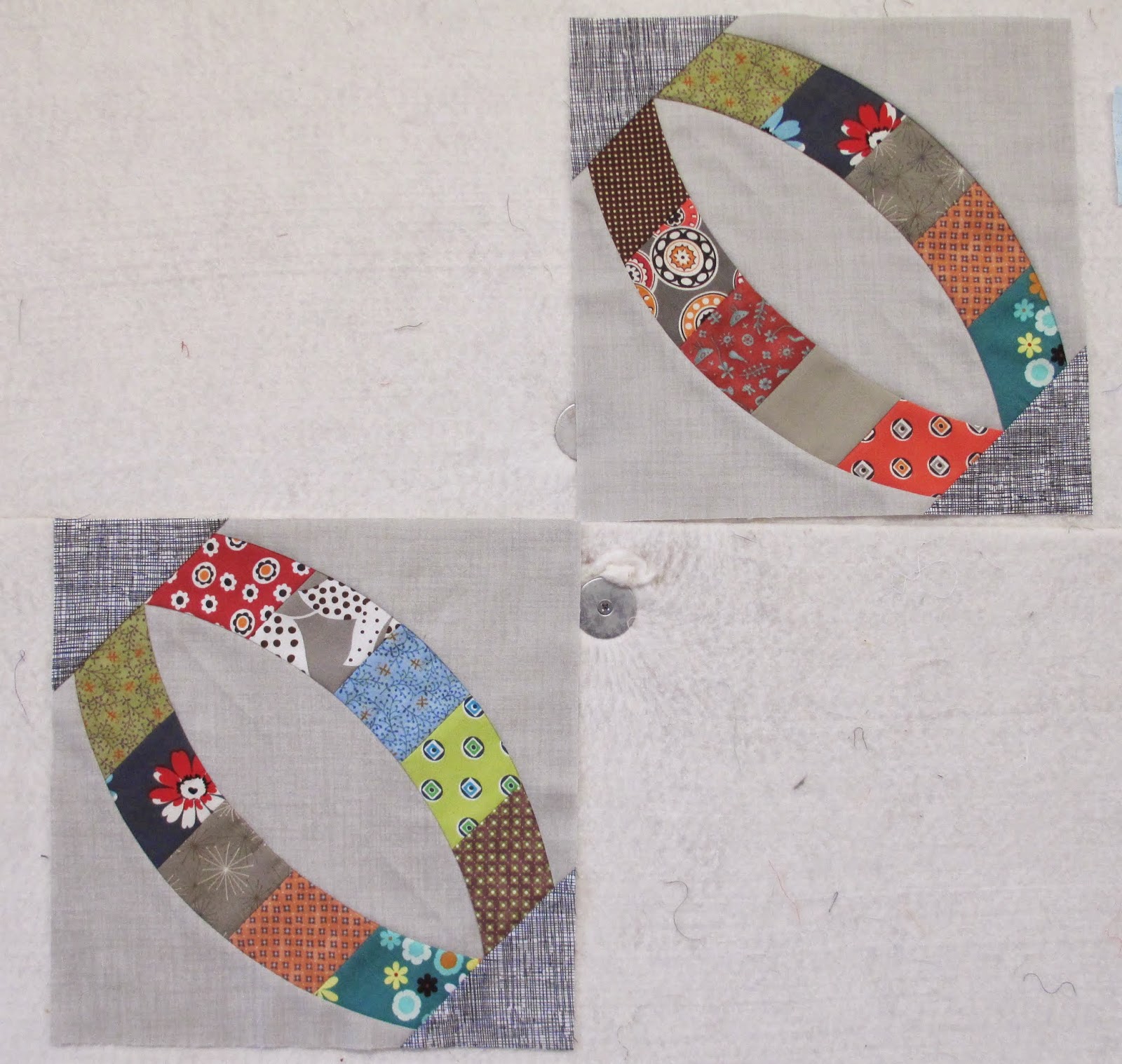 The background is a beautiful Moda Weave... a printed woven pattern with a bit of a sheen... kinda almost.  This silvery beige is the perfect compliment to the assorted prints I've accumulated - it's got a vintage vibe that I'm really happy with. 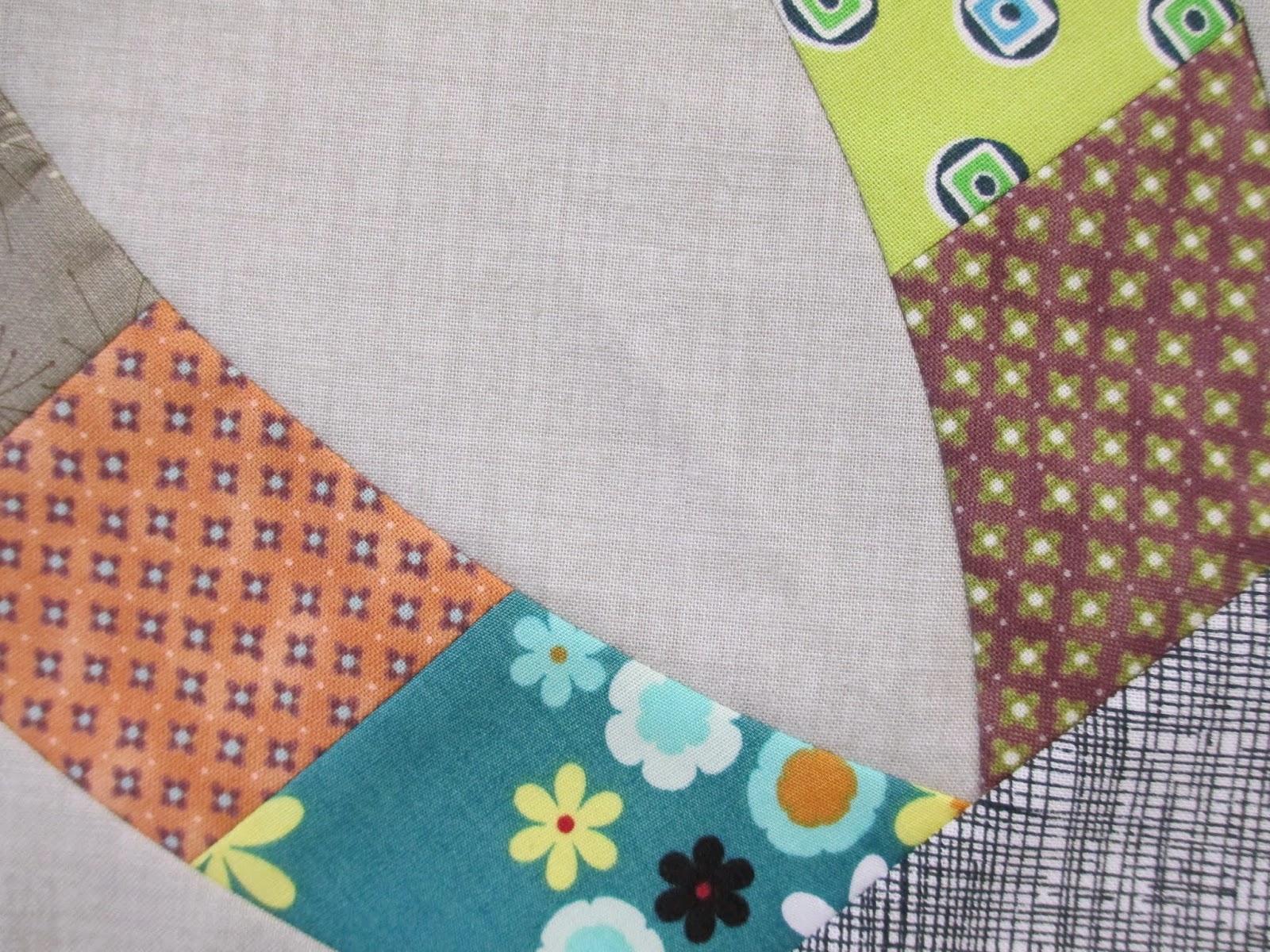 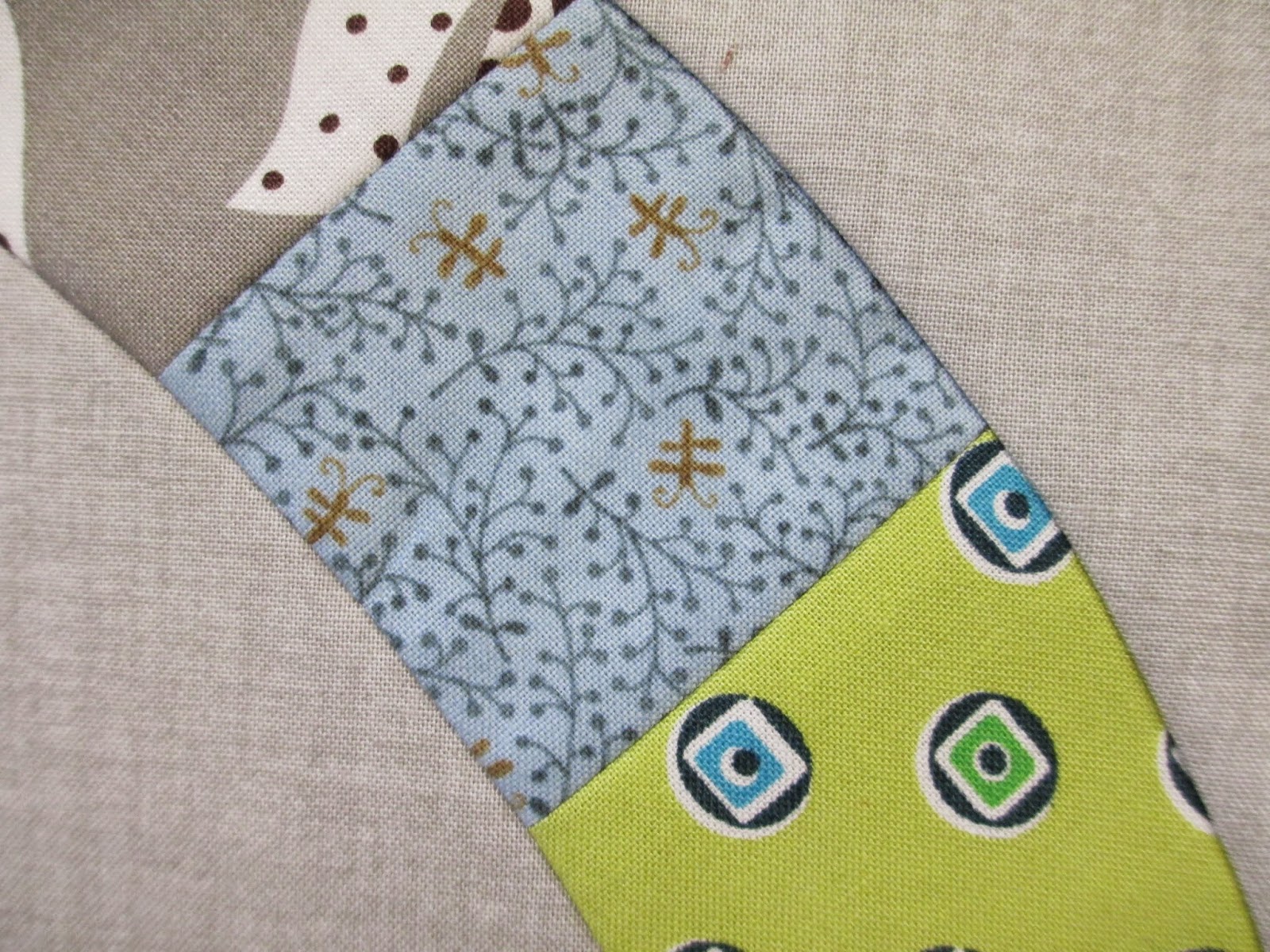 In my mind I see applique in the background square which is formed by four blocks meeting up.  I just haven't figured out exactly how I'm going to do it.  I also need to work out what fabric I'm going to use for the alternate blocks triangle corners (instead of the black/white sketch).  Perhaps a solid?  Or a dark print?  Any ideas???

This weekend I want to spend a bit of time sorting through my BOM stitcheries... funnily enough they don't seem to get done when you have them packed away.  And the Tokyo Subway quilting is still waiting for the second half to get started.  Plenty to keep me busy!

What are you up to this weekend? 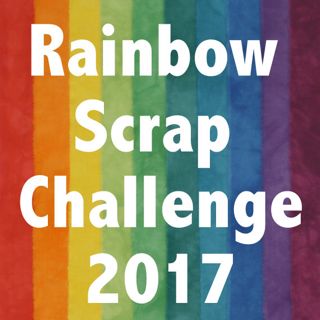 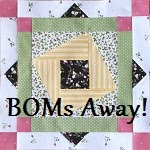